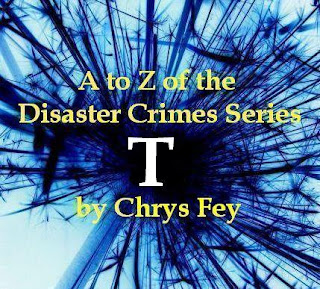 Hurricane Crimes rode on the shoulders of Beth and Donovan while they’re stuck together during a hurricane. Only one other person, a bad guy, makes an appearance and that’s near the end of the story. But in Seismic Crimes, many characters make appearances, and Thorn is definitely my favorite.

Thorn is a detective for the Orlando Police Department. He works sting operations and helps to bring down drug dealers. The case he’s on now is Ryan Goldwyn’s murder. He’s working with Donovan, Officer Burnett, and the Chief of Police to hunt down David Buckland, the killer who escaped.

Thorn is funny. He pushes Donovan’s buttons for sport and flirts with Beth, but he’s also their friend on the inside and the one who comes to their aid throughout the series.

He shook his head. “I’m fantasizing about taking you home.”

Donovan opened his eyes. Thorn had his arm around Beth’s shoulders. “And you’re still touching my girlfriend.”

“That’s because I’m trying to steal her away from you.”

Donovan rounded on Thorn, ready to hit him. “Why the hell are you so excited about that?”

“I’m just happy Beth will have her bikini.”