I am on Unicorn Bell today with Dear Mad Writer.
Do certain things about writing/publishing make you mad?

Hurricane Sabrina is the star of Hurricane Crimes (published 2013). The narrator (that’s me!) and my characters (Beth and Donovan) are on a first name basis with the super storm. We call her Sabrina. On occasion Beth refers to the storm as...Bitch.  Yup.

This category 5 hurricane is not only big but she’s a pain in the butt. She destroys Beth’s house, as well as many other houses, floods a lot of Florida, crashes Donovan’s car into a tree, and throws the state into utter chaos.

A deep groan touched their ears and pulled their eyes to the ceiling above them. Time stalled as they listened to the creaking of the house and the monstrous moan of ninety mile-per-hour wind.

Suddenly, a transparent claw ripped away a strip of ceiling, creating a gap that wind and rain invaded. Beth’s cards flew right out of her hands and the mountain of jelly beans scattered to the ground. Donovan shot to his feet. With one hand, he grabbed the battery-operated lantern. With the other, he grasped Beth’s hand and pulled her out of her chair. The wind ate away at the ceiling and followed them as they ran down the hallway.

Donovan kicked open the bathroom door and yanked Beth inside. She hurried to the tub, stepped over the ledge, and sank into the deep porcelain ditch. The first ridiculous thought that rushed through her terrified mind was “I should’ve grabbed some jelly beans.”

He slammed the door in Sabrina’s face and locked it. After he set the lantern on the counter, he hunkered in the tub next to Beth. His arm automatically came around her, and fear had her nestling into the side of a relative stranger.

The door trembled in its frame.

On the other side, the sounds of banging and shattering was deafening as pictures crashed to the floor and items tumbled off furniture. Sabrina was ransacking Beth’s house.

To read more from Hurricane Crimes go to Amazon. 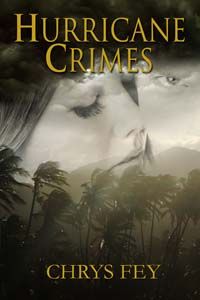 QUESTIONS: What do you think of the excerpt from Hurricane Crimes? Have you ever experienced a hurricane?