Writing About: The Mob

I created my own Mob in 30 Seconds. The great thing is you can change up the rules in fiction. You don’t have to have an Italian or Russian Mob. I don’t actually mention the nationality of the Mob in my story, just that they live and run Cleveland, Ohio with the goal to kill cops.

Here are 10 things to consider if you want to write about the Mob:

There will have to be a leader/boss, otherwise the members will run a muck .Your leader has to be the biggest bad ass of the group with the clout to control criminals of all kinds. He, or indeed she, should have a recognizable name (or nickname) and appearance. The leader of my Mob is known as Red “because of all the blood on his hands.”

A Mob boss can’t be a leader unless he/she has followers. These men and women need to be tough with criminal backgrounds. You should try to introduce a few loyal followers close to the leader to make the Mob more real. Also try to give each of them distinct appearances and personalities so your readers can tell them apart.

What kind of criminal activity does your fictional Mob do (murder, money laundering, grand theft auto)? Whatever they do will impact the plot of your story.

What city does your Mob run? Where do they live and work? If they’re real big and bad, they can be known across a whole state or small country.

How did the Mob in your story get its start? Is it a family thing, or did a group of like-minded criminals get together? Share this bit of information early on so your readers can understand the Mob’s motives. 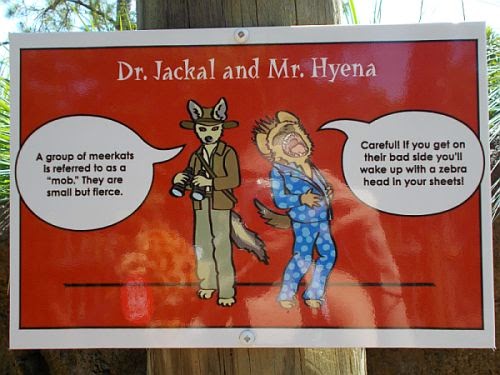 I saw this sign at the Brevard Zoo in Florida.

Along with knowing what kind of crimes they commit, you also need to consider their goal. They could be after weapons, money/diamonds, drugs, or revenge. In 30 Seconds, the Mob kills police officers with the goal of wiping them all out of Cleveland.

Mob's have a lot of victims from innocent bystanders to people they specifically target. Give your fictional Mob victims, too.

Mobs aren't very threatening unless they have guns. Give them a slew of guns. In 30 Seconds, my Mob has a lot of AK47’s, the guns known as cop killers because the bullets can penetrate Kevlar vests.

Criminals usually have a plan. Give your Mob a plan to get what they want. Even if you don’t reveal it, it’ll become known through your plot.

The leader of your Mob needs to be ruthless in his pursuits, cruel and cold-hearted. His/her followers need to be mean and vindictive, too, with a thirst for blood, money and revenge.

TIP #1: Capitalize the “m” in Mob. Otherwise, you’ll be referring to a horde of people like those who flock to shopping centers on Black Friday. (Some writers don't do this though, so it's really up to you.)

TIP #2: Watch Mob movies or any movie with a criminal gang.


QUESTION: What name would you give a Mob leader in a work of fiction?

Email ThisBlogThis!Share to TwitterShare to FacebookShare to Pinterest
Labels: Character Development, Mobs in fiction, Writing About