Kyra Lennon created this fabulous blog hop for anyone and everyone to share a story or poem about a cat. The entries for this blog hop will be turned into an anthology and all the proceeds will go to Teignbride and Totnes Cat Protection. I, of course, couldn't pass up this opportunity to help. To read the other stories by participants go HERE. 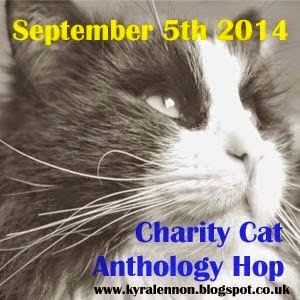 Kyra, I give you permission to use my work in the book. :D

On a warm September day in Florida, I orchestrated the Great Kitty Rescue.

Most cities in the United States have an abundance of stray cats roaming the streets and taking up residence in neighborhoods. Ever since I was a little girl with golden pigtails, I would fall in love with stray cats and—with the help of my big, green eyes—persuade my parents to let me keep them. As an adult, nothing changed that much. Except for the pigtails.

When a stray mommy cat in my area took her litter and left behind a single kitten with vibrant green eyes, I took care of her by feeding her and leaving the door to my patio open to serve as shelter. Despite the fact that she would venture into my apartment with curious eyes and cautious steps, she remained wary of me. She soon grew up to become a mommy herself and gave birth to four bundles of fur—one black, one gray tabby, and two yellow tabbies. Knowing she could trust me, she led her babies into my apartment, letting them get used to the strange smells and alien surroundings. Her four kittens were a little over a month old when she disappeared. I continued to feed her babies and kept an eye out for her, hoping she’d return. She didn’t.

On the Autumn Equinox of 2013, I woke up to a kitty nightmare; a woman had one of the yellow tabbies in her claw and was using him to lure out the other kittens. Panic surged through my veins like magma. The urge to storm out of my apartment and snap at her in my pajamas, my hair mused, and my breath ripe from sleep was unbearable, but I managed to dampen the sensation. I had seen the woman several times before, which only heightened my anxiety. She had a cat with a broken tail that roamed the complex and fought the kittens’ mom, which was probably why she left, seeking safety and peace. This woman was also the mother of obnoxious twin boys who caused havoc; chasing after the mommy cat and throwing rocks at the kittens’ shelter. For the kittens’ sakes, I couldn’t let her get a single one of them!

But to my horror, the black kitten, a little fur ball that hopped like a bunny, crawled out into the open and right into the woman’s trap. She grabbed the black kitten, frightening him so badly that he fought against her. His struggle freed both him and his brother, and they scurried back to safety.

Determined, the woman left and returned with a small bowl of cat food. She put the bowl down and hunkered low to the ground, waiting for them to emerge. They didn’t. She soon grew tired of waiting and went back to her apartment, but her twins and a group of their friends haunted the area, on the lookout for the babies.

All day long, as I decorated the inside of my apartment for Halloween, I watched the horde of children. With each ghost and skeleton I pulled out of my box of Halloween decorations, I concocted a plan to get the four kittens into my apartment. I tied a piece of yarn around the door handle of my patio door and weaved it through my home to my hiding place.

At dusk, when the babies crept out of their hiding place, I opened the sliding glass door to my apartment, put a plate of food on the floor, and waited for them to come for their dinner. One by one they entered my apartment and surrounded the plate. As they ate, I pulled the length of yarn to close the porch door, and quietly slide the glass door behind them.

With their bellies full, the kittens went to leave and encountered a sheet of glass in their way. The black kitten became frantic, walking back and forth along the track, rallying up his three brothers. Fortunately, their fear only lasted a minute before they started to bat around a pumpkin bell I left out for them to play with. That first night, they slept in a huddle under my kitchen table. By the third night, I woke up to find all four kittens cuddled by my feet in bed. They soon felt right at home and became permanent additions to my family—Cole, Clover, Milo and Otis. 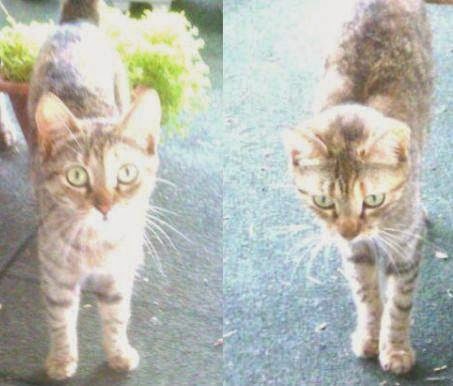 The kittens' mom AKA Kitty. 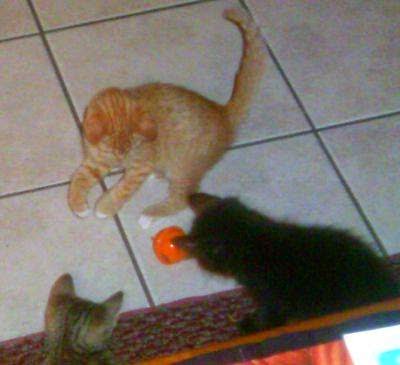 Playing with the pumpkin bell. 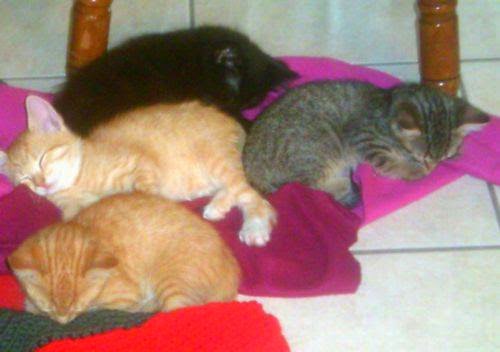 Their first night sleeping under my table. Chrys Fey is an author with The Wild Rose Press. She has published two eBooks, Hurricane Crimes and 30 Seconds, and she is currently writing the sequel to Hurricane Crimes to serve as book two in the Disaster Crime series. Her blog, Write with Fey, is dedicated to helping and inspiring writers. She lives in Florida with her four cats.