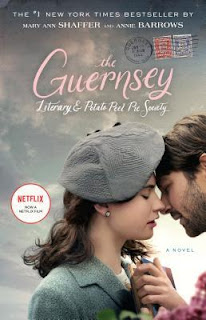 The Guernsey Literary and Potato Peel Pie Society is our October/November fiction book, voted on by our members.

A couple of years ago I went to my first ever book event/signing as a featured author. The first day was for workshops. I remember roaming around, seeing the people in attendance and noting how many of them knew each other and were greeting each like long-lost friends. I smiled at them, wanting to introduce myself, but not many made eye contact with me. If they did, they shifted away. I felt like a leper.

The New Kid on the Block

The next day, during the signing, although I did meet an author I knew online (yay!), I felt like an outcast.

While I went around, going from table to table to introduce myself and exchange business cards, I got blank stares in return. At one point, when I was introducing myself to one author, a group of three others came up to her, and the four them squealed and showed excitement at seeing each other again. I was literally pushed aside.

Another person came up then, a reader, with two canvases that she was getting the authors to sign. (They were pretty full already.) She asked the author I had been attempting to talk to, to sign a canvas. Then she asked another author among the group to do the same. I expected her to ask me (I was wearing the red “featured author" lanyard), but she took back the canvases and left. I went back to my table and noticed her approach all the other tables around me, but she didn’t approach mine. I know that it can be easy to skip a table on accident, but I couldn’t help but feel the sting of rejection.

I went home from that two-day event not wanting to attend another book event again as an author. I was being dramatic, of course, because I signed up to attend the next year because the event itself is a great one.

But last year during the workshops, although I was a bit more known among the group, I once again felt like an outcast. I did greet a few authors I’d come to know, but aside from that, when they were busy with others, I stood there, wondering what to do. There were groups of authors everywhere, circled around each other; no way to join them without feeling like and looking like an intruder.

My mom was a featured author along with me, and I whispered to her, “It’s just like last year when I was ignored.”

I worried that the signing would be the same, only for it to be the exact opposite. Many people, authors and readers, approached me, knew my name, my series, even my YouTube videos! I was SHOCKED. And I sold several books.

An event may not go the way you expect it to, but it’s important to learn from every experience—good, bad, ugly, or average.

Although I felt rejected and didn’t sell the first year, I looked around and took mental notes of what other authors did and what readers seemed attracted to, such as big banners, so I got one. I also did more promoting in the Facebook groups set up for this event. On top of that, I offered a deal on my books if someone bought more than one, which cut the event price of the second purchase (which was already discounted a lot) in half. The effort I put in to change the outcome for Round Two worked.

Make an effort to get to known those who will be in attendance beforehand.

Many other authors in the same event, possibly even in the same moment, will be feeling like an outcast, too. You may not see them or notice, but they are there.

I could’ve let these things get me down, but I refused to. I went back last year, this year, and I will be going back next year. I just don’t attend the workshops, to avoid that insecure feeling I had two years in a row.

Remember that not all book events will be the same. You can sell a lot at one, nothing at another, and just one at yet another one. Not even a book event you go to repeatedly will be the same for you every time. This is normal.

Roll with the punches.

Stay in the game.

After an event, find time to relax, to take it all in. You need time to rest and rejuvenate, especially if it doesn’t go the way you expect it to. Pour yourself a drink, eat a chocolate bar or a big bowl of ice cream, watch your favorite movie, take a nap.

Then start planning for the next one.

QUESTION: Have you ever felt like an outcast at an author event? Or during another time?

P.S. Later this month I’ll be sharing a post about another experience I had at a book event.