In May 2011, more than a hundred people died in the deadliest tornado outbreak this century.


In fact, it was the deadliest tornado outbreak in the modern era. In this day of forecasts and tornado sirens and weather alarms, most people can get to safety before a tornado hits.
Last night, May 18, 2017, my city was once again under a tornado warning. I was reminded of that night six years ago when we were under a tornado warning the same time as Joplin. Joplin was the perfect recipe for disaster, and when the mile-wide tornado struck, the city wasn't ready.
The night of that tornado, my little city forty minutes away was also under a tornado warning. I spent the night in the bathtub downstairs with my little babies, completely unaware that less than an hour away a city was being decimated. When I learned of the disaster, I wondered what on earth I could do to help. My husband was deployed, I had three children under the age of six, and I'm a small-framed 100-pound woman.
It came to me one morning as I drove to a book signing that took me through Joplin. I was listening to the radio, and the deejay said, “We have your help and your support now, but remember us in six months. We will still need you. Remember us in five years. In ten years.” I realized how true that was. Joplin’s recovery would take a decade, but in the face of the next national disaster, no one would give Joplin a second thought.
And I knew what I could do. I could write a book. I could memorialize what happened, permanently etch the survivors' words into history, and donate all the proceeds to Joplin.
And that's exactly what I did. 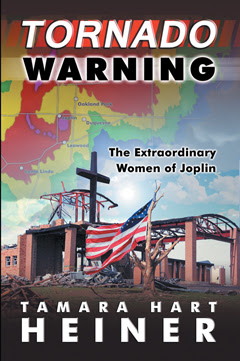 I’m not a meteorologist; I’m not even a journalist. I’m a fiction writer. So the first thing I did was contact the National Weather Service and ask them if they could direct me. They did. They put me in contact with Steve Runnels from the Springfield, MO weather center. He kindly sent me official documents and reports of the incident, accountability reports they had to make explain the disaster, to show what they did to prevent it and what could be done in the future. He also patiently answered all my questions as I stumbled through the weather jargon and attempted to translate the legalese to layman terms. Next I contacted various professors and meteorologists to have them read over my interpretation of the data and make sure I got it right (the hardest part was that they sometimes contradicted each other on what they thought was correct). It was painstaking and I frequently broke out in a cold sweat when I worried about getting something wrong. But with their help, we got it together. The first third of the book is a technical explanation of what happened, but written so that the average person can read it and understand.
The last third of the book is a treatise on emergency preparedness, and again I had many kind professors to thank for conducting interviews with me and helping come up with a concise plan any citizen can follow.
The meat of the book, however, is where the heart is. Rather than just have a piecemeal of several different people talking about what happened to them during the ten minutes the tornado ravaged its way through Joplin, I wanted to give an intimate picture into the lives of a few people. I need a snapshot of their day from beginning to end, and then the reconstruction afterward. I conducted dozens of interviews and found women were much more willing to talk than guys. Not only that, but they could usually remember the kinds of details that give an experience flavor. Being a fiction writer, I wrote in the narrative nonfiction style so that the interviews read like a story rather than a documentary.
Thus the book became about the women who held their families and neighbors together during and after the tornado. I wanted to show more than just the sensational, dramatic event. I wanted to show how such an event affects the entire community. I also wanted the book to be inspirational, to focus more on the tender, nurturing, hopeful side of humanity rather than the dark, pillaging side that often emerges in a crisis. The book was picked up by Dancing Lemur Press, a press that often publishes inspirational nonfiction.
This book holds a special place in my heart. It was by far the hardest book I’ve ever written, and I doubt I will ever tackle a project like it again. 100% of the royalties go straight back into helping Joplin rebuild, and when Joplin doesn't need it anymore, I'll pick another city that does.I hope that if you read it, you will feel some of that thriving, irrepressible human spirit, that fire that refuses to give up. The book is available here  through all major online retailers and is also available on audio!
Don't forget. Whether it's Joplin or Baton Rouge or somewhere else, help where you can. When you can't, thank the Lord that you have what you do and pray for those that don't.

Tamara Hart Heiner is a mom, wife, baker, editor, and author. She currently lives in Arkansas with her husband, four children, a cat, a rabbit, a dog, and a fish. She would love to add a macaw and a sugar glider to the family. She’s the author of several young adult suspense series (Perilous, Goddess of Fate, Kellam High) the Cassandra Jones saga, and a nonfiction book about the Joplin Tornado, Tornado Warning.