The kick ass girl I want to highlight is Gabi Hernandez from Gabi- a Girl in Pieces by Isabel Quintero.

I fell in love with Gabi while I read this book. She's so refreshing because she's not cookie-cutter perfect. Gabi is sixteen years old and facing many of the things that real kids face nowadays. Her best friend Cindy is pregnant, and her other best friend Sebastian is coming out. Her father is a meth addict, and her mother is strict.

She is Mexican-American but feels as though she's not Mexican enough for her family and not white enough for Berkeley. What we're reading is her diary. She talks about race, ethnicity, gender, weight issues, bullying, rape, and sexuality in a real, though-provoking way. She also finds passion in poetry. My favorite parts of this book was reading Gabi's poems. 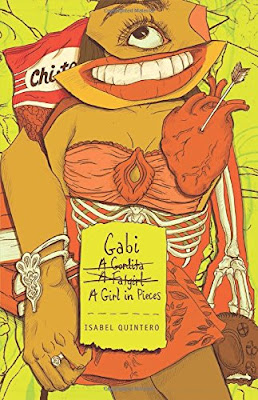 Every month I am highlighting an empowering woman. This month it is:

Gal Gadot played Wonder Woman in Batman Vs. Superman. Everyone loved her performance and said she was the best part of the whole movie. So, it’s no surprise that they decided to do a Wonder Woman movie (set to release June 2nd). Before she became an actress and had her break out role in the Fast and the Furious franchise as Gisele Yashar, she had a far more fascinating life.

Gal Gadot is Jewish and was born in Israel. When she was 18, she won the 2004 Miss Israel Competition and competed in the Miss Universe Pageant. Two years later, she served two years as a solider of the Israel Defense Forces.

“You give two or three years, and it’s not about you. You give your freedom away for a while. You learn discipline and respect. The things I’ve been through as a soldier prepared me to deal with career things as well.”

Following her time in the army, Gal studied law.

If you’re still doubting that she’s a bad ass, how about this: She’s a motorcycle rider and did most of her stunts in the Fast and the Furious movies. On top of that, she’s a mom and the second-highest paid actress in Israel.

The fact that she’s the first non-American to portray Wonder Woman makes me love Wonder Woman that much more.

“It is so important for girls and boys to have a female, strong superhero to look up to.”

This song is about bullying by Elise Estrada. Listen to it! The song and video are dedicated to Amanda Todd who committed suicide when she was 15.

QUESTIONS: Who is your favorite Kick Ass Girl of YA? Do you like Wonder Woman? Did you watch the Fast and the Furious movies?