Dance the Moon Down by R.L. Bartram / Excerpt 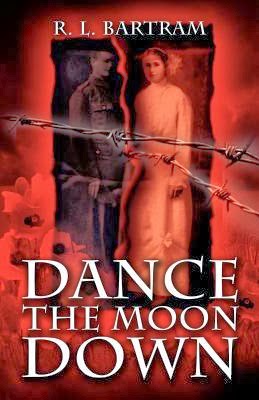 In 1910, no one believed there would ever be a war with Germany. Safe in her affluent middle-class life, the rumours held no significance for Victoria either. It was her father’s decision to enrol her at university that began to change all that. There she befriends the rebellious and outspoken Beryl Whittaker, an emergent suffragette, but it was her love for Gerald Avery, a talented young poet from a neighbouring university that sets the seal on her future.

After a clandestine romance, they marry in January 1914, but with the outbreak of the First World War, Gerald volunteers and within months has gone missing in France. Convinced that he is still alive, Victoria’s initial attempts to discover what has become of him, implicate her in a murderous assault on Lord Kitchener resulting in her being interrogated as a spy, and later tempted to adultery.

Now virtually destitute, Victoria is reduced to finding work as a common labourer on a rundown farm, where she discovers a world of unimaginable ignorance and poverty. It is only her conviction that Gerald will some day return that sustains her through the dark days of hardship and privation as her life becomes a battle of faith against adversity.

Victoria heard someone pass close by, approach the desk and stop. After a moment, not having felt a hand on her shoulder, she opened her eyes to see a young officer standing in front of her. He bore such a striking resemblance to Gerald that for a moment she thought that it was actually he.

‘This is Lieutenant Fairchild,’ Colonel Bass informed her bluntly, ‘temporarily assigned to this department. I’ve put him in charge of investigating your husband’s case. In future, you’ll direct all your questions to him.’ Closing the file, he handed it to the lieutenant.

The lieutenant took the file, turned to her, smiled and gestured that she should follow him.

Victoria was only too glad to do so, but as she rose to leave, Colonel Bass had one last word of warning.

‘In future, young woman, I suggest that you confine your activities to the appropriate channels. If you persist in pursuing your original course, you may discover that this department is no longer disposed to offer you the leniency it’s shown today.‘ With that, he looked down and began writing again.

With an outstretched hand, Lieutenant Fairchild reaffirmed his invitation for her to follow him. Victoria couldn’t wait to get out of the room. She was shaking from head to toe and in such a state that, by the time she reached the corridor, she was desperate to confide her feelings to just about anyone.

‘That man,’ she told the lieutenant, her voice wavering with emotion, ‘that awful man is overbearing, rude and insensitive!’

‘He’s a colonel in the British army,’ Lieutenant Fairchild pointed out. ‘He’s supposed to be.’

His candour did nothing to alleviate her distress. ‘Do you know, he accused me of being a spy?’

The gravity of her statement merely seemed to amuse him. ‘My dear Mrs Avery, if he’d ever once thought that you were actually a spy, then you’d never have been allowed into this building. At this moment, you’d be languishing in His Majesty’s Prison Holloway, awaiting execution.’ Victoria drew a huge gasp, her eyes widening with incredulity; she could hardly believe her ears. ‘You mean to say that he put me through all that, knowing all the time that I wasn’t a spy?’

‘Believe it or not, he did you a favour,’ Lieutenant Fairchild told her. ‘It could have been far more serious had he wished to make it so.’ Victoria was incensed. She felt completely humiliated.

Disregarding his remarks, her agitation began to boil over. ‘That’s despicable!’ she fumed.  ‘I don’t think the corridor is the best place for this conversation,’ he advised. ‘I’m certain we’ll be much more comfortable in my office.’

The lieutenant’s office was tiny in comparison to the baronial hall occupied by Colonel Bass, but it was far more inviting. It was hardly bigger than a cupboard, lined with filing cabinets and cluttered with stacks of paper that further reduced its size.

‘Sorry about the mess,’ he apologised, ‘but lowly lieutenants don’t rate a lot of space.’ He paused, studying her for a moment. ‘May I offer you some tea?’ he asked. ‘You look as though you need it.’

When the tea arrived, Victoria was grateful to receive a cup. Her ordeal had left her parched, and it was all she could do to stop herself from gulping it. Nevertheless, to her acute embarrassment, each time she tried to replace the cup back onto the saucer, her trembling hand made it rattle conspicuously, and in spite of trying not to, she slurped when she drank.

Lieutenant Fairchild waited patiently for her to recover enough to continue. Eventually, Victoria put the cup down and eyed him warily. Despite his good looks and easy charm, she was still paranoid about military conspiracies. ‘It won’t work, you know,’ she told him.

The lieutenant folded his hands on the desk top and smiled indulgently. ‘What won’t work?’ he asked.

She was certain that he knew exactly what she was talking about, but if he insisted on continuing this silly charade, then she would tell him anyway. ‘I’ve made a nuisance of myself, and after frightening the life out of me, that colonel of yours thinks to distract me by putting a pretty face in my way.’

It took him some moments to comprehend what she was alluding to. Then suddenly, his eyes widened in surprise. ‘Oh, I see. You mean me. I can honestly say that I’ve never thought of myself in quite those terms before,’ he admitted, still somewhat bemused by her remark. ‘Do you suppose Colonel Bass sees me that way?’

Victoria was only too well aware that his amusement was entirely at her expense, and was determined not to be the butt of the joke.

‘You know precisely what I mean, Lieutenant,’ she remarked coldly.

‘Please, call me Alan,’ he invited, taking her by surprise, ‘and may I call you Victoria?’

He had a beguiling way about him that easily disarmed her caution, and after an appropriate pause required by formality, she nodded her consent.

‘Excellent,’ he beamed. ‘I’m sure we’re going to be great friends.’

Under any other circumstances, his remark might have been considered presumptuous. Perhaps the harrowing events of the last few hours had tired her, wearing down her resistance, making her susceptible to his overtures. In any event, Victoria found the suggestion not altogether unattractive. Maybe Colonel Bass was a better judge of character than she’d given him credit for.

Born in Edmonton, London in 1951, Robert spent several of his formative years living in Cornwall where he began to develop a life long love of nature and the rural way of life. He began writing in his early teens and much of his short romantic fiction was subsequently published in various national periodicals including “Secrets”, “Red Letter” and “The People’s Friend”.

Never one to let the necessity of making a living get in the way of his writing, Robert has continued to write for the best part of his life whilst holding down a succession of jobs which have included Health food shop manager, Typewriter mechanic and Taxidermist. Yes- you read that correctly.

His passion for the history of the early twentieth centaury is second only to his love of writing.  It was whilst researching in this area that he came across the letters and diaries of some women who had lived through the trauma of the First World War. What he read in them inspired him to write his debut novel “Dance The Moon Down” and the rest, as they say, is history.

Robert is single and lives and writes in Hertfordshire.

QUESTIONS: Do you like historical dramas? What did you think of the excerpt for Dance the Moon Down?