Words to Cut Out of Your Writing


In my recent post, How To Edit a Book, the second step says to “Cut it Out!” and refers to clichés and passive voice, but there are words you should cut out of your manuscript too.

Here is a list of words I have accumulated over time from editors:

"That" is a word editors always warn against. “That” sneaks into a lot of sentences, but it’s not always necessary. Most of the time, you can delete “that” and the sentence will still have the same meaning but it'll tighter.

Example: She swore that it would never happen again.

Better: She swore it would never happen again.

These three words clutter sentences. Once you eliminate them your sentences will be more assertive, and will sound better. With my own writing though, I do keep them in my character’s dialogue because these are words that people say all the time, I just try to limit them as much as possible. See . . . there’s that “just”! lol

Example: She just didn’t know what to do.

Better: She didn’t know what to do.

When something is “almost” or “slightly” it is boring! And if something or someone “seems” like whatever, you’re telling your readers there is a chance that they aren’t. But why?

1.    Above the clouds, the sun was almost blinding.

Better: Above the clouds, the sun was blinding.

Better: She was mad. (This is more thrilling!)

3.    The world outside seemed quiet.

Better: The world outside was quiet. 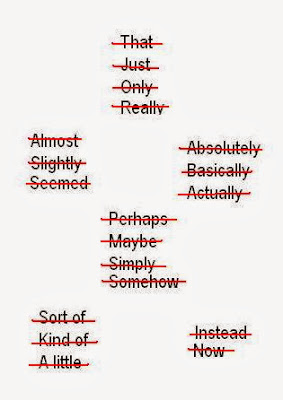 Natalie Goldberg, the author of Writing Down the Bones, says not to use modifiers, but to use clear, assertive statements to create more impact.

Example: She simply didn’t know what to do.

Better: She didn’t know what to do. (Do you see how much more assertive this sentence is? Taking out “simply” makes the sentence stronger.)

Once again, these three words clog sentences, and don’t provide extra meaning. If something is absolute, basic, or actual, you don’t have to add “absolutely”, “basically” or “actually”. Readers will get it; they’re smart. I will admit I use “actually” in dialogue, but I try not to overuse it.

Example: She was absolutely sure the killer had run into the woods.

Better: She was sure the killer had run into the woods. (See? This is just as absolute without “absolutely”.

Here is a word that I will admit, made me scratch my head when I heard writers shouldn’t use it, but when editors tell you to cut it out, you cut it out as much as possible! I’m sure I still have “instead” somewhere in my manuscripts, but there is far less than there were.

If you are talking about the past and present it is okay to use the word “now”, but I’ve noticed in my writing that I used the word “now” often and it was unnecessary.

TIP: If “now” is at the beginning of a sentence, no comma comes after it.


Avoid these phrases too:

Example: Her cut sort of hurt.


QUESTION: Are there any words you have learned to eliminate from your writing? Please share in case I have to cut them from my writing too! ;)

Email ThisBlogThis!Share to TwitterShare to FacebookShare to Pinterest
Labels: Editing, editing a book, how to edit a book, modifiers, Natalie Goldberg, words to cut out of writing, Writing Down the Bones, Writing Tips