Welcome to the book blast for Buried Secrets! I am delighted to host A.Y. Stratton today and to share her intriguing excerpt for this twisty-good romantic-suspense. Here is the sexy cover: 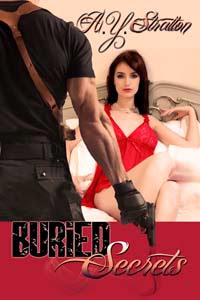 Bad Luck that lands them in the midst of a vendetta.

Each is on a mission: Kate to rescue documents for her grandmother, and Nathan to collect evidence of a dirty lawyers’ illegal activity.

Courthouse lawyers expect stunts form Attorney Crosby, but Kate’s friends would never imagine the professional fund-raiser would think of exceeding the speed limit, much less entering a stranger’s home. Or of having a hot affair after her fiancé dumped her for being an ice queen.

The documents Kate finds suggest a candidate for U.S. Senate is guilty of reckless homicide and bribery… Soon everyone Kate loves is in danger.

EXCERPT:
She’d seen a dead woman. It wasn’t a dream. And then she and Nathan had slipped away, pretending they’d witnessed nothing, seen nothing, stolen nothing.

Her breath caught, and she battled another round of tears. She was mortified at her behavior in the middle of the night. Never before had she been hysterical. Maybe the sleeping pill did that to some people. Made them psychotic. That was it.

And then Nathan had come into the bedroom and wrapped his arms around her and calmed her down. And stayed. Right there next to her.

She had to get out of his house.

Nathan’s hand moved from her shoulder to her neck, and he sighed. Kate turned over very slowly. In the crack of light from the hall, she saw he’d thrown off the top half of the covers. He was shirtless, in a deep sleep, his eyelashes still.

Gazing at him unabashedly, she noticed his firm, sculpted chest. Was he naked? Completely nude? She considered peeking beneath the covers to be sure, but what if he woke up and caught her at it? 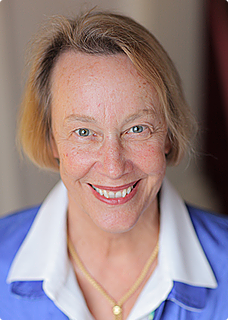 BIO:
A. Y. Stratton grew up in Glenview, Illinois, and Elm Grove, Wisconsin. By the time she was 14, she was determined to write stories like Ellery Queen, Mary Roberts Rinehart and Agatha Christie.

While her children were young, she submitted short stories to magazines and newspapers and received rejection slips. A.Y. jumped at the chance when a friend asked her to write cover stories for an ad publication. Next she begged her way into free-lancing for a string of community newspapers, which led to her own bi-weekly column. A. Y.’s most unusual assignment followed, writing for the Milwaukee Brewers web site. Aimed at women baseball fans, the column continues as “Anne in the Stands.”

After A. Y. joined Romance Writers of America, she concentrated on writing on romantic mysteries. In September of 2009, Wild Rose Press published Buried Heart, a romantic suspense tale involving an uptight public relations agent, an archaeology professor and a Mayan Codex dating back before the invasion of Cortez.

Boy, I just love that excerpt! Don't you? Please leave A.Y. Stratton a comment to tell her what you think of her cover and book. And if you're just as interested as I am, don't forget to get your own copy!

Thank you, A.Y., for sharing Buried Secrets with us!